Thought the retro revival was done and finished, think again. Flares, fringing and very short miniskirts are set to dominate the catwalks as the Seventies revival takes a firm grip of 2015 fashion. Psychedelic, bold colours and stunning flower prints will be paired-up with super short leather mini-skirts, colourful leg wear and accessorised with oversized ear and face wear. The catwalks of London, Milan and Paris have all featured seventies fashion this year and although this slow burner of a revival started way-back in 2011 by Marc Jacobs and Christopher Kane it has slowly influenced year-on-year as the Seventies vibe is set to dominate.

For women sunglasses are not just about rose pink tints and round frames, sunglasses will have a heavy frame, completely oversized and bold in colour whilst the main push in men's eyewear will see the conventional aviator dropped in favour of larger, plastic variations. Both metal and plastic frames are going to feature throughout the year so look for influences from Mui Mui, Louis Vuitton and Saint Laurent. Carrera were huge in the Seventies and given the current range has one eye on the past, expect Carrera to remain a firm favourite as the prices are exceptional for a top designer brand, hence our sunglasses of the month, Carrera Champion.

Military inspired colours were big during this decade so expect variations to penetrate the sport branded sunglasses such as Oakley and Carrera Sport. For seasons now we have seen camouflage on the catwalks boasting ordered precision and military dominance so it's of little surprise to see Oakley have already launched a range of olive-coloured frames for their best selling models of frogskin and two-face. Carrera Sport have also launched a range of camo inspired frames that are now available across a wide range of core models such as the Safari and Champion.

The Seventies were also a convoluted yet elegant decade and fabric prints typify this perfectly. Bold, brash patterns in dull greys and drab sepia tones we long forgotten and stunning silhouettes printed on beautiful fabric were purposely displayed by leading brands such as Prada, Gucci and Dior. Eye catching fabric prints are an elegant alternative to the ever popular psychedelic brash of bold colours and flash lenses; just look at the latest sunglasses from Mark Jacobs and Ray-Ban for proof that the Seventies really did shake our perception of fashion over functionality. 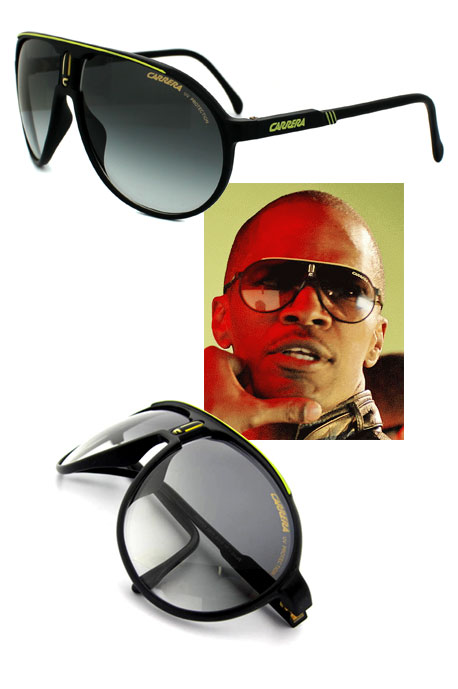 Bags of retro chic the Champion GV8 also has a polarized lens filter which brings modern technology to a stunning retro frame.

The Champion CCP model features the highly retro white frame that has a matt finish and a look that is just huge with celebs world-wide.

Militaly camo was huge in the Seventies and Carrea have just the model, Champion FEL has a crystal frame with camo brown and green effect.

A retro combo of purple and white is a classic colour mix and the Champion 84T pulls this together perfectly, the sparkle on the temple is the perfect finishing touch!

Nothing screams Seventies more than an oversized aviator with psychedelic colours and a mirrored lens! Wow the Champion TW0 has it all.

Just like the Champion TW0 this model of Champion (the Z20) has bags of Seventies character with brown crystal frame and that must have gold mirrored lens.